I do share some intimacy with this particular asana.

My Ashtanga yoga practice used to stop there for 8 months. As I could not bind properly I was not allowed to move forward and was guided directly to the closing series.

That is when I was able to open a dialogue with my ego, understand the importance of having a regular practice, learn not to compare myself with others, focus on the present moment, accept and above all, welcome my own limitations.

However, on a laborious day during which my practice was very low level, magic happened.

I was finally able to bind on my own, bring my feet behind my head.

I think it was a “surrending day“.

How to prepare Supta Kurmasana? 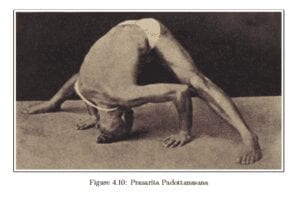 Ardha Baddha Padmotanasana, Ardha Bada Padma Paschimotanasana, Janu Shirshasana, Gharbapindasana, will be essential in order to work the flexibility of the back legs and the opening of the hips.

Shoulders opening should be practice as well with Marichyasanas and Prasarita Padotanasana C.

Therefore most of the asanas practiced during the Primary Series are a preparation to Supta Kurmasana.

If you are not a practitioner of the the Primary Series, it is possible to prepare Supta Kurmasana with the same logic of anatomy including hips opening, back of the legs and shoulders opening.

This posture should not be practiced right away as soon as the sitting posture started. A good preparation is highly necessary and required.

It is an advanced asana, and should not be practiced by beginners.

Pratyahara – withdrawal of the senses

This asana is not advanced “only” because it required flexibility.

If we were to give any one of the 8 limbs of Yoga, we will attribute it the 5th which is called as Pratyahara – the withdrawal of the senses.

“Pratyara itself is termed as yoga, as it is the most important limb in yoga sadhana” – Swami Sivandana

The term “Pratyahara” is a sanskrit word made of two words Prati means “against or away” and Ahara means “food”.

It has been compared to a turtle withdrawing into its shell. The turtle shell is the mind and the turtle’s limbs are the senses.

The term “food” is not only taken as what we eat but also on how feel about our emotions wether positives or negatives. Pratyahara is the control (or mastery) of Ahara.

It does not mean that we should ignore our emotions but more we should be able to see them, being awarded of them and just let them go.

Supta Kurmasana is the “sleeping tortoise”. When a turtle sense the danger or feel that something is going on, it does not try to go toward it, it simply retract its limbs inside its shell.

When we take a deep look at the asana itself, feet are behind the head, legs are toward the ears (protection toward all external sounds), hand binded (not in contact with the floor), forehead touching the floor.

Bandhas will be activated for advanced practitioners. It is also interesting to notice the connection of “Ajna” and “Sashsarara” Chakras.

Ajna Chakra is the third eyes, the intellect, awareness, open mind – and Sahsarara Chakra is for the highest state of consciousness.

In a nutshell, even if the turtle is sleeping, it is well awarded of its environment, but is not disturb by it. It knows exactly where it stands, here and now. Have you ever tried to wake up a turtle? Whatever you do, it does not move, wherever you will bring it, it won’t have any reaction, however it will have full conscious of what is going on.

You can yell at it, jump around, make all the noise you want, the turtle won’t be moving a limbs…. however you might become frustrated about it.

If we go further toward this analysis, and make a parallel with the human being behaviour, it is the fact to understand our emotions, our feeling, the understanding of our environment and people surrounding us who might have any influence on us, situations, events.

Often we can read here and there that Yoga is all about circus, and this posture can be assimiliate to it. Visually it is for sure that this asana has been designed only for contortionist.

In the practitioner world, we shall reach that asana with respect and no emergency, however this asana is accessible to anyone, the only one condition is to have a regular practice, not to give up and surrender to it.

At time when I was not able to bind on my own, I used to wait for adjustment and the help of my teacher, Iain Grysak.

One day during the practice, I saw Iain coming to my mat, as I was folding forward and trying to catch my hands, I saw his feet on my mat and quickly release my effort because I “knew” he was about to ajdust/help me.

While he did not….. he was not moving but watching me…. then he said “You are giving up”….. and left my yoga mat….

I was in between anger and frustration.

On the very same day, I started developing pain in my ears. I had otitis for the next 3 days…. knowing when you have otitis your sense of hearing is slightly diminished…. one of the 5th senses….

That is not gymnastic

I finally bind on my own four months after this little “incident” with my teacher. In total I have spent 8 months, stuck on Supta Kurmasana.

Eight months during which I had massive changes in my life personally and professionally speaking.

Deep questioning, envy and repressed desires, the feeling of not being able to move forward, the rejection, acceptance, understanding of my behaviour toward others. It was a huge moment in my life during which my “highs” were really high as well my “downs” were really low….

Mentally and physically speaking my body was moving on roller coaster, during all that time my body was talking to me. It was a time for a deep introspection.

And that is only from this particular moment, that my practice of Yoga, the “real” Yoga, the yoga in all of its dimension really started.

It was highly symbolic to me and had a huge impact on my decisions and on my futur as well.

Since then, the turtle became my “totem animal”. Moving slowly but surely, not paying attention to what people may tell, have told, will tell about me.

I understood the difference between what we know and what we think we know.

To the question “what is Yoga?”, I like to think that it is a better understanding of ourself, if we are able to understand who we are and where we are going, it is possible to have the best version of ourself.

However the path is long, dangerous, difficult, but in the end full of joy and infinite.