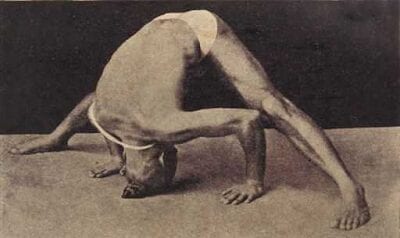 D : Grabbing the big toe with the index and middle finger.

While practicing this morning I realised how much the second version was pretty close to the first one.

The first version – Both hands on the ground

The hands are flat, placed in between the two feet. They are not in front or behind. Fingers pointing forward.

In this position one learns quickly enough that one must push against the ground, by sucking it from the palms of the hands, in order to lengthen the back.

The elbows are pointing backwards with a gap no wider than the shoulders.

The hands on the ground have an important action, as it is by them that the lower back is lengthening. The pelvis should be in a neutral state (no anterior tilt).

The weight of the body is forward to keep the buttocks aligned above the greater trochanter.

By pushing against the floor with the hands, it is easier to bring the shoulder blades backward along the spine, which will be helpful to open the body front while extending the upper back.

This first version allows us to work in opposition, using the pranic energy opposing the apanic one.

The feet are slightly inwards which will give more flexibility to the ankle, and will be helpful for all upcoming lotus postures.

Inner thighs are active, and not collapsing. The head can touch the ground, but it is in not mandatory.

Second version – Hands at the waist

For a long time I used to dislike this version. Until I realised how similar it was to the first version.

The positioning of the hands at the waist is exactly the same as for the Version A, when both hands are on the ground. If for some it was obvious, for me before today it had never tilted. As a matter of fact, elbows are not open but on the side, well aligned with the shoulders, fingers tips pointing forward.

Same action, exception made for the opposition. It will be done through the activation of the belly muscles as hands won’t be on the floor to create it.

In order to bring the chest closer to the thighs by pressing against the floor, belly muscles will be in action. We can underline that the process come from the Bandhas, to a small detail, Bandhas are activated by a Kumbhaka (retention of breath).

However here, we should be breathing, so there is no bandhas activation, however the core center will be activate.

The more we activate it, easier it become to create the opposition between the pranic and apanic energy.

This posture is beneficial for all preparation of backbends. It helps to open the upper body and give good flexibility to the shoulders.

The more you practiced, lowest the arms will go.

Intention is the same as for previous versions, trying to fold forward using core muscles and inner thighs.

As the index and middle finger grabbed the big toe, the big toe is pressing downward as fingers pull backward.

That is where the opposition is taking place.

By doing so, it will help to glide the shoulder blades downward along the spine in order to lengthen the cervical spine.

Shoulders should not be running toward the ears.

Elbows will be facing up.

If the intention comes from an anterior tilt while folding forward, there will be too much compression in the lower back.

Bringing slightly the feet inward is also very helpful for the ankle and keep the all structure active from bottom to top.